My dad turned 70 this year, so Matt and I decided to make him an old man rocking chair. This project was an adventure. We wasted a lot of perfectly good cherry by repeatedly messing up and/or changing our design. Still, I’m proud of how it came out: 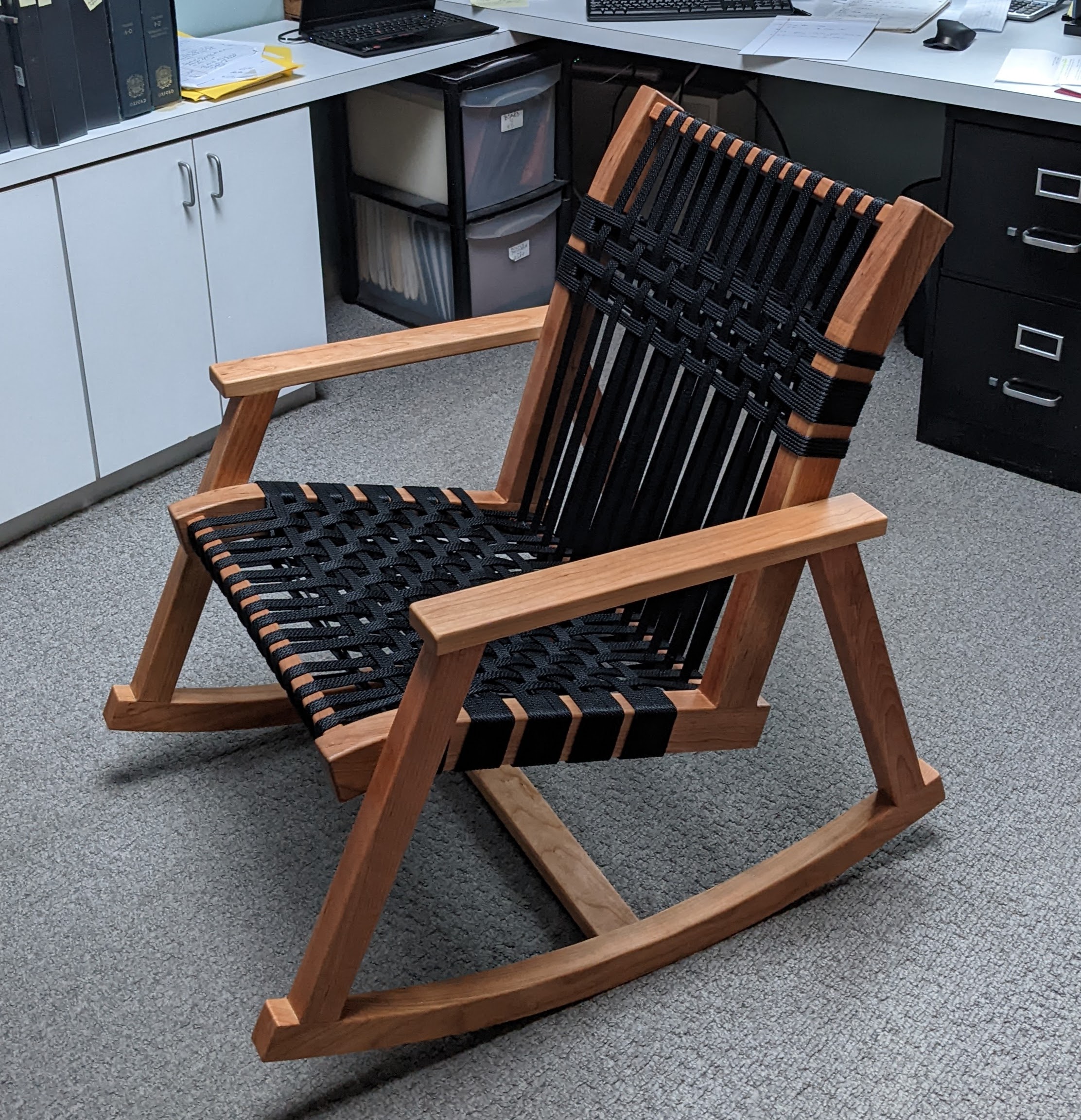 Our inspiration was a beautiful rocking chair we found online:

Our starting design closely followed the Masaya chair. We planned to copy most of the details including the bridle jointed rockers, cantilevered armrests, and stretcher-supported seat. As we built, we made some changes. Usually, we plan things out in advance and more or less stick to the plan. This time, we often deferred choices until we were forced to make them. For example, we never had a coherent plan to connect the seat to the stretchers. Ultimately, we avoided the stretchers all together and fastened the seat to the fame with four 3/4” pins. This strategy, driven mostly by laziness and indecisiveness, was both flexible and stressful. I wasn’t truly confident in the project until we clamped up for the last time.

Eventually, we landed on this: 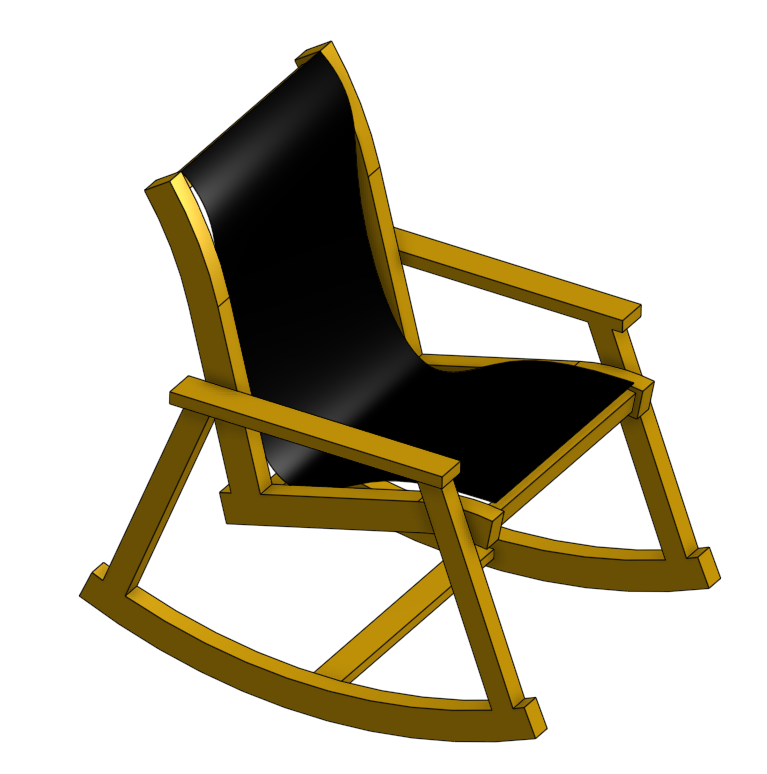 A Botch-Job in Three Acts

We worked on this project over three periods: one in around Halloween, one over Thanksgiving, and one just after Christmas.

This was definitely our spookiest (and least successful) session. Matt and I got together and made doomed pieces for the frame. We cut two rockers, four vertical supports, and three stretchers. Out of the nine pieces we built that weekend, only three made it into the final piece.

The rockers were the most bone chilling part to replace because they were cut from a ridiculously expensive piece of 9” wide 8/4 cherry. I bought a band saw on Craigslist specifically for this project. It’s a cheap 8” Delta benchtop band saw. I drove about an hour to pick it up. The seller turned out to be a pawn shop. 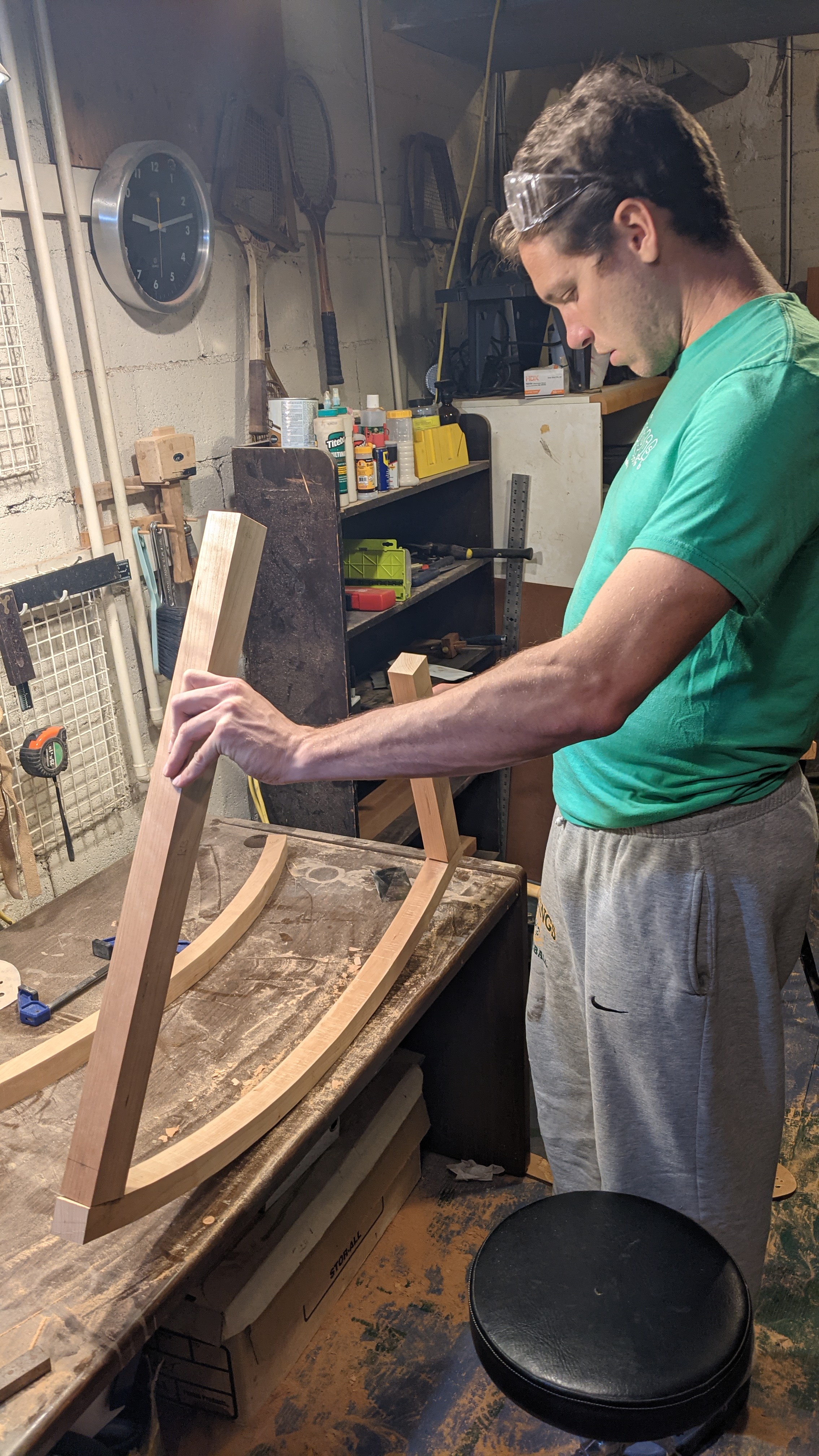 We tried some test cuts and were immediately disappointed. This saw clearly wasn’t powerful enough for 8/4 hardwood and the surface finish was absolutely terrible. We opted instead to cut the rockers using a jigsaw. This was a big mistake. Rocker one looked okay, but while cutting rocker two the blade deflected almost half an inch. We switched back to the band saw to correct the undercut, but the damage was done. We convinced ourselves at the time that thinner rockers would be okay, but I think we both knew the truth.

Over Thanksgiving, we made the seat. We bravely defied typical three act structure, so this session went much better. One contributing factor was a new band saw. Will joined me to drive up toward the New Hampshire border to buy a much bigger and much better 12” Craftsman band saw for only $75. The seller was a nice man who had just finished reffing a soccer game and was not a pawn shop. Here’s Matt using it to cut a part of the seat back: 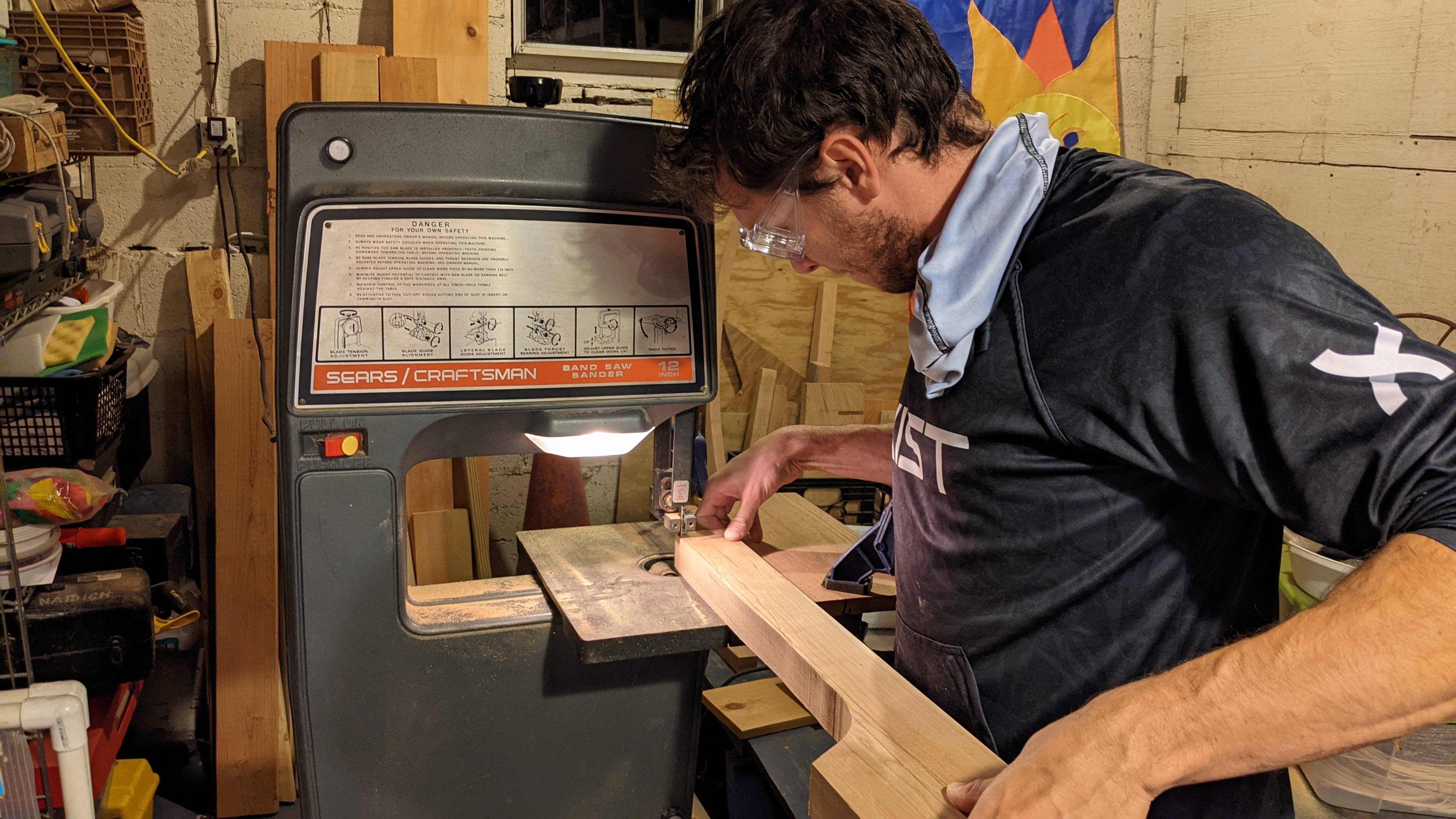 One aspect of the design that we deferred until the last minute was the woven seat. We bought a thousand feet of black polyester rope and ignored the question until it was time to start winding. The rope came on a massive and intimidating spool. We tested out a few options and dove in. Clamping the seat to a vertical column allowed us to pass the spool back and forth easily. 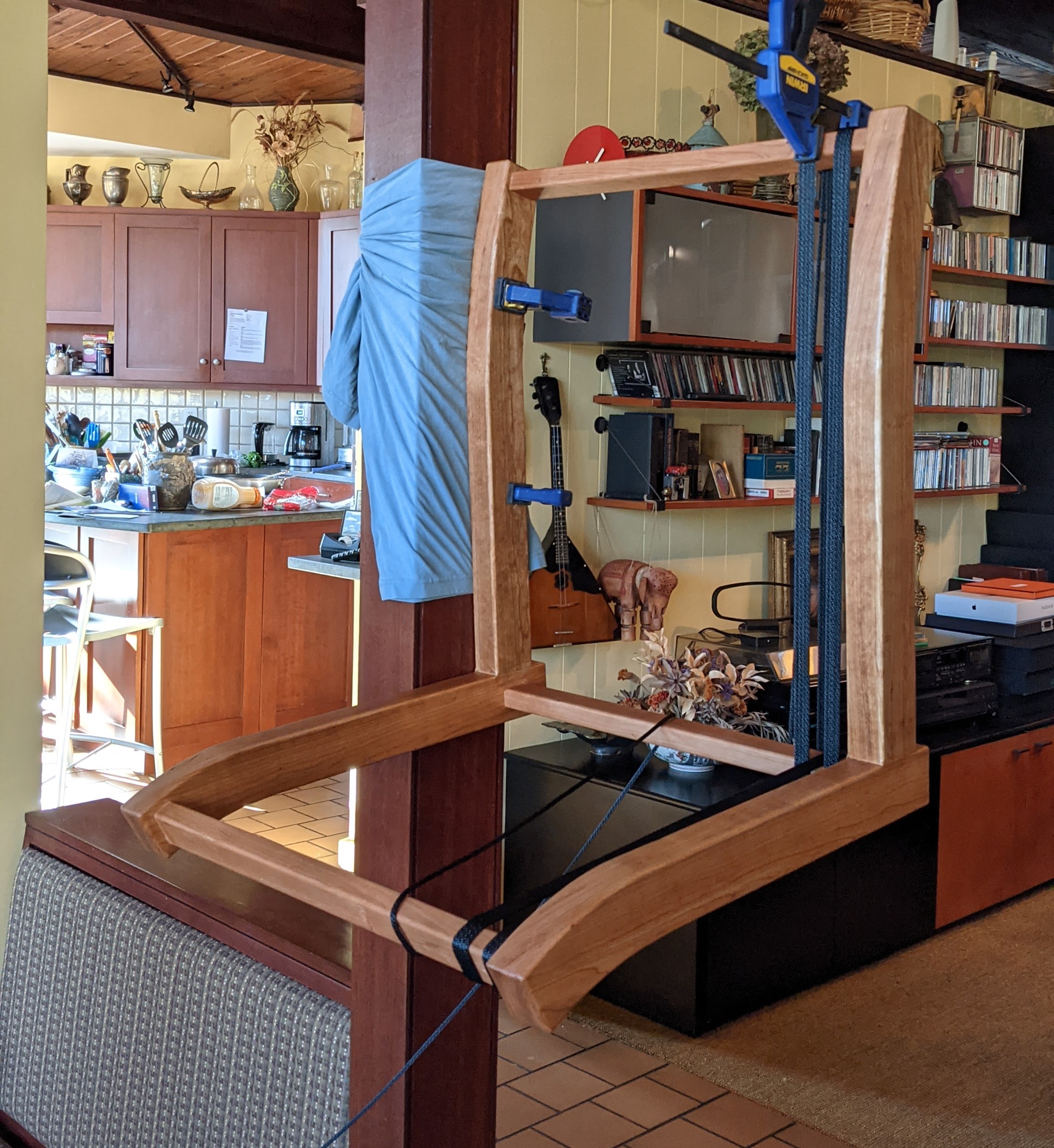 There was so much rope. 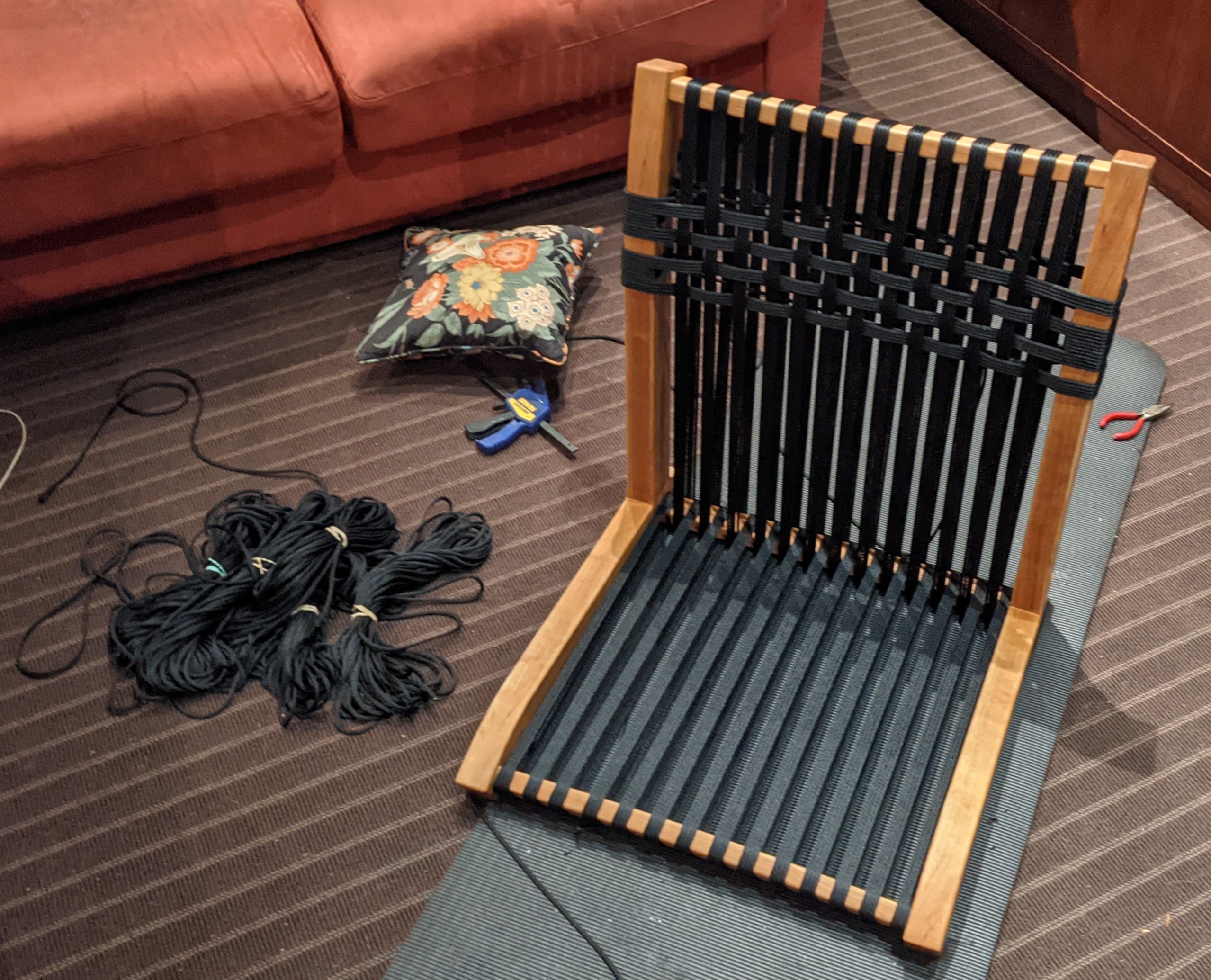 Eventually, it came together. 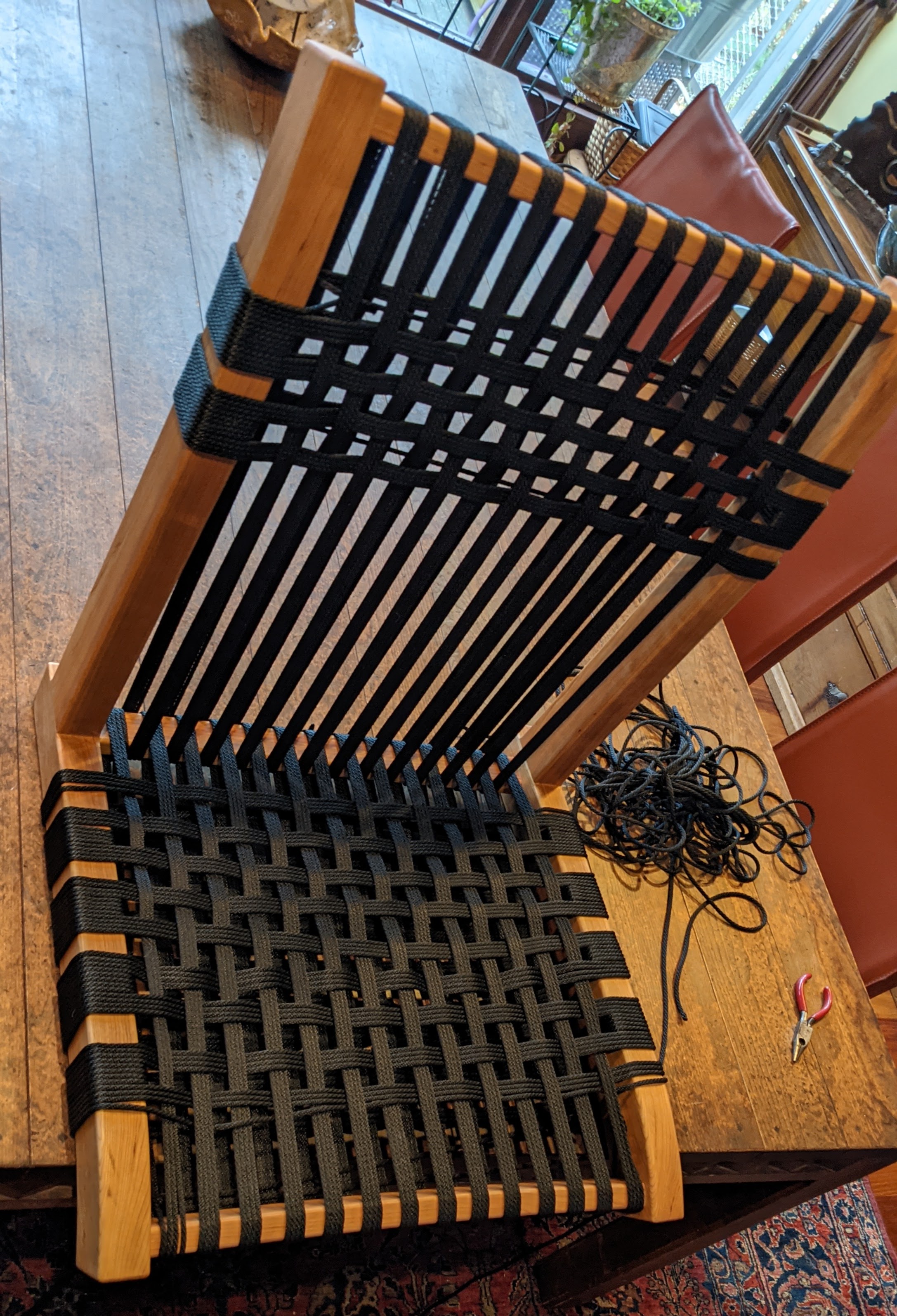 The climactic final act. We got together for almost a week after Christmas and finished things up. First order of business: bite the bullet and buy more wood. The new rockers were a huge improvement. It was definitely the right decision to replace them. We also changed the design, replacing the cantilevered armrests with a more symmetrical design and adding overhangs in a few places to visually match the seat. 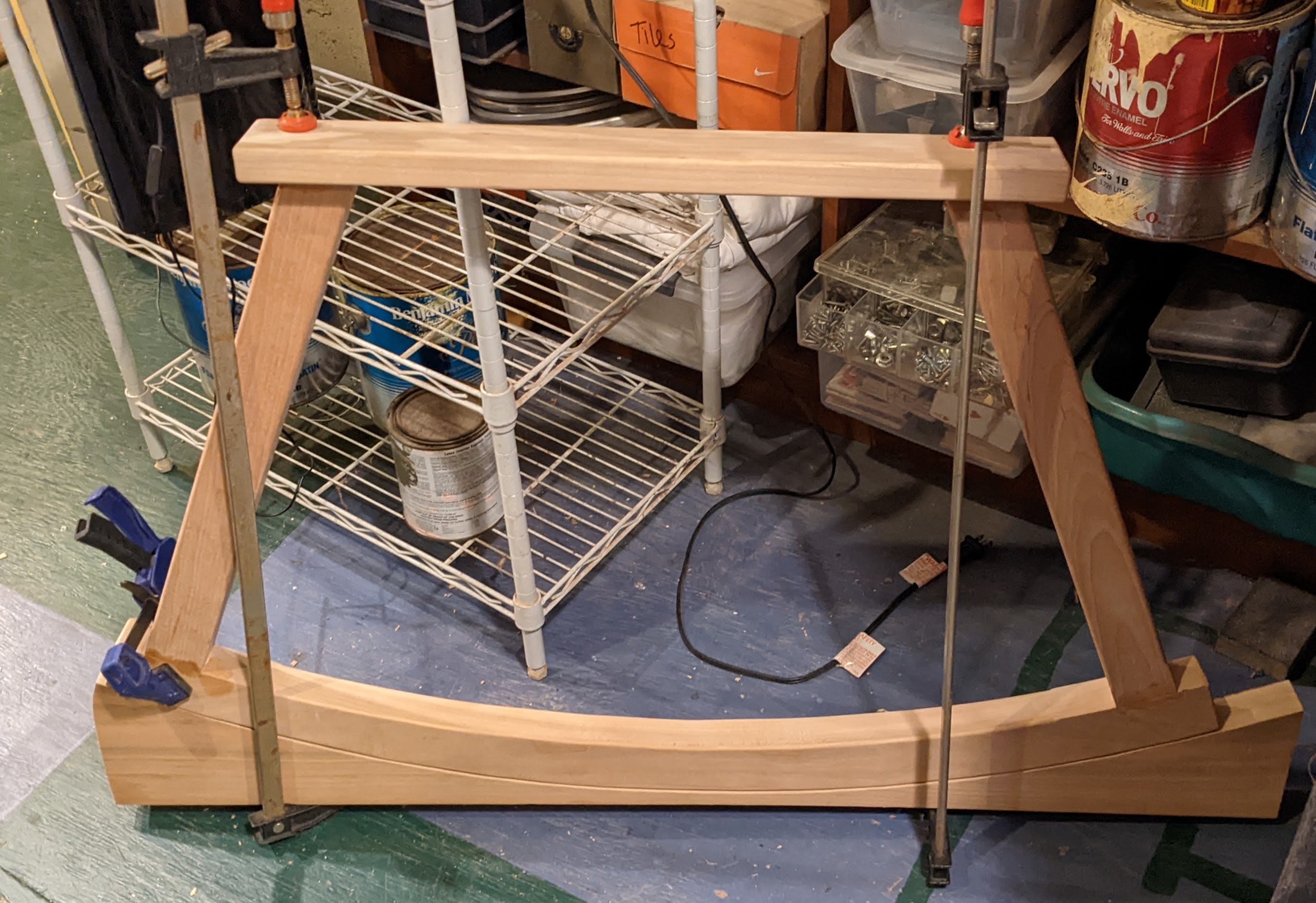 As we clamped the seat to the frame to decide how it would fit, we realized that the stretchers supporting the seat weren’t necessary. Instead, we connected the parts with pins. 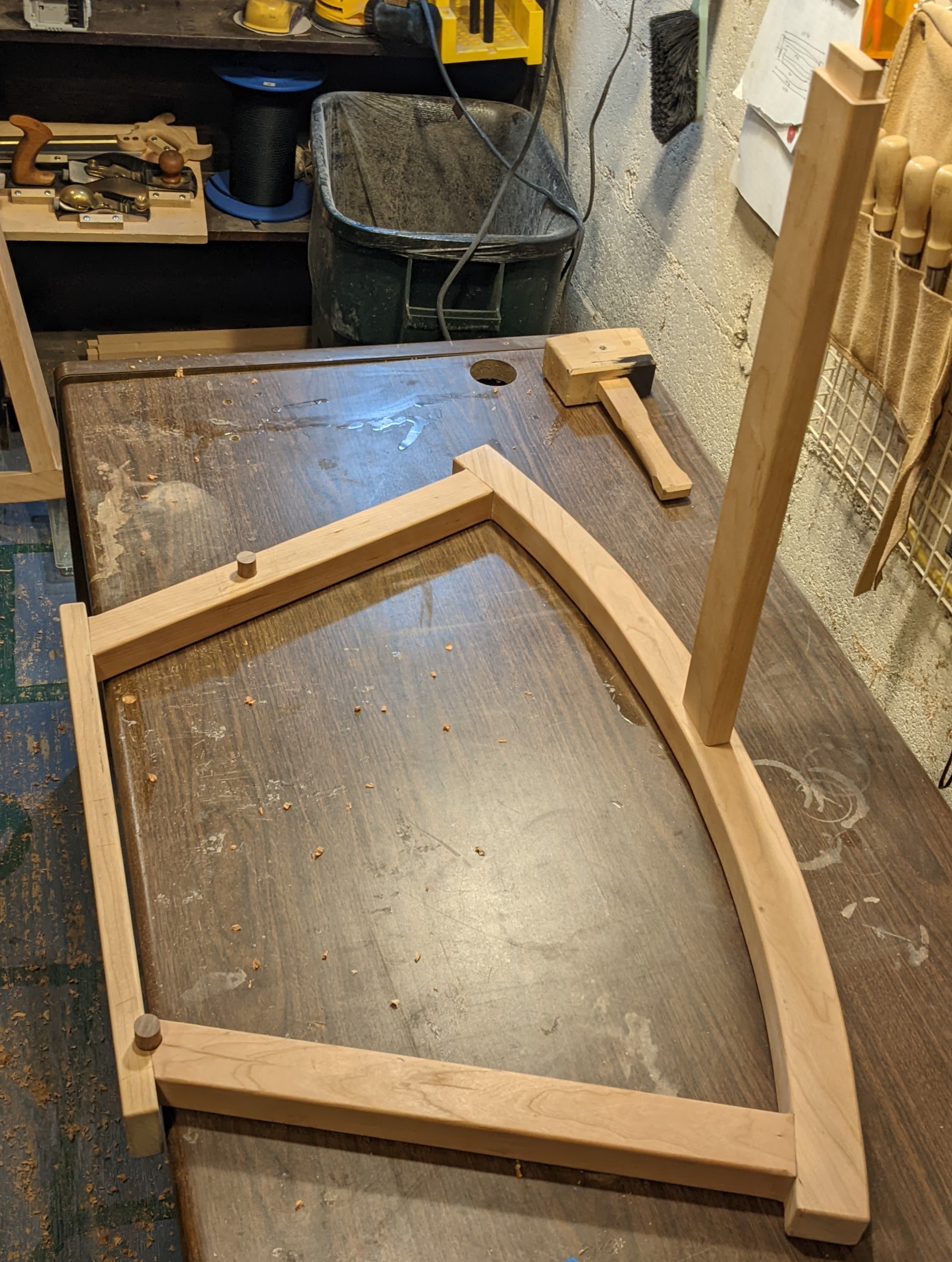 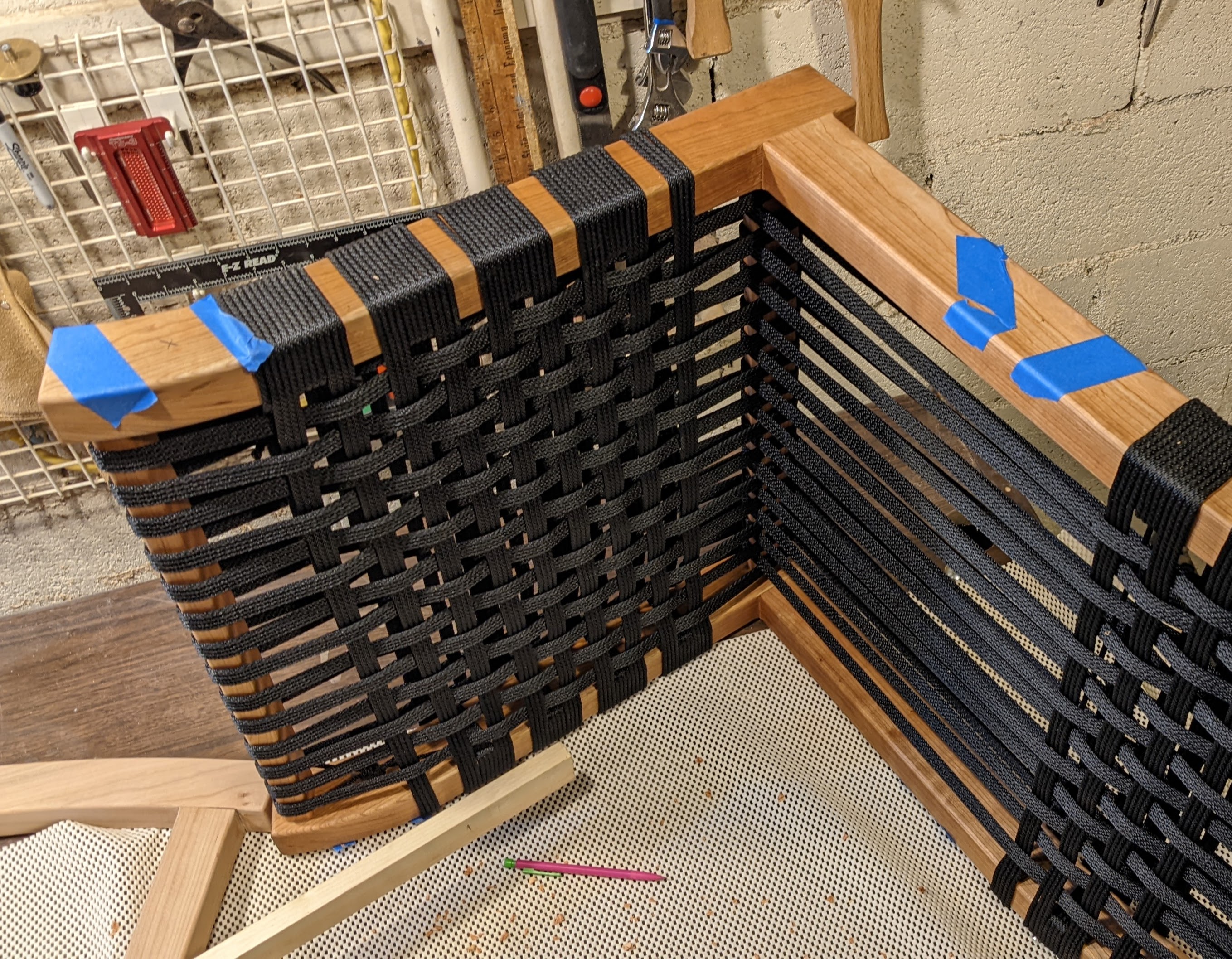 We finally glued things up at 3 AM on New Year’s Day. 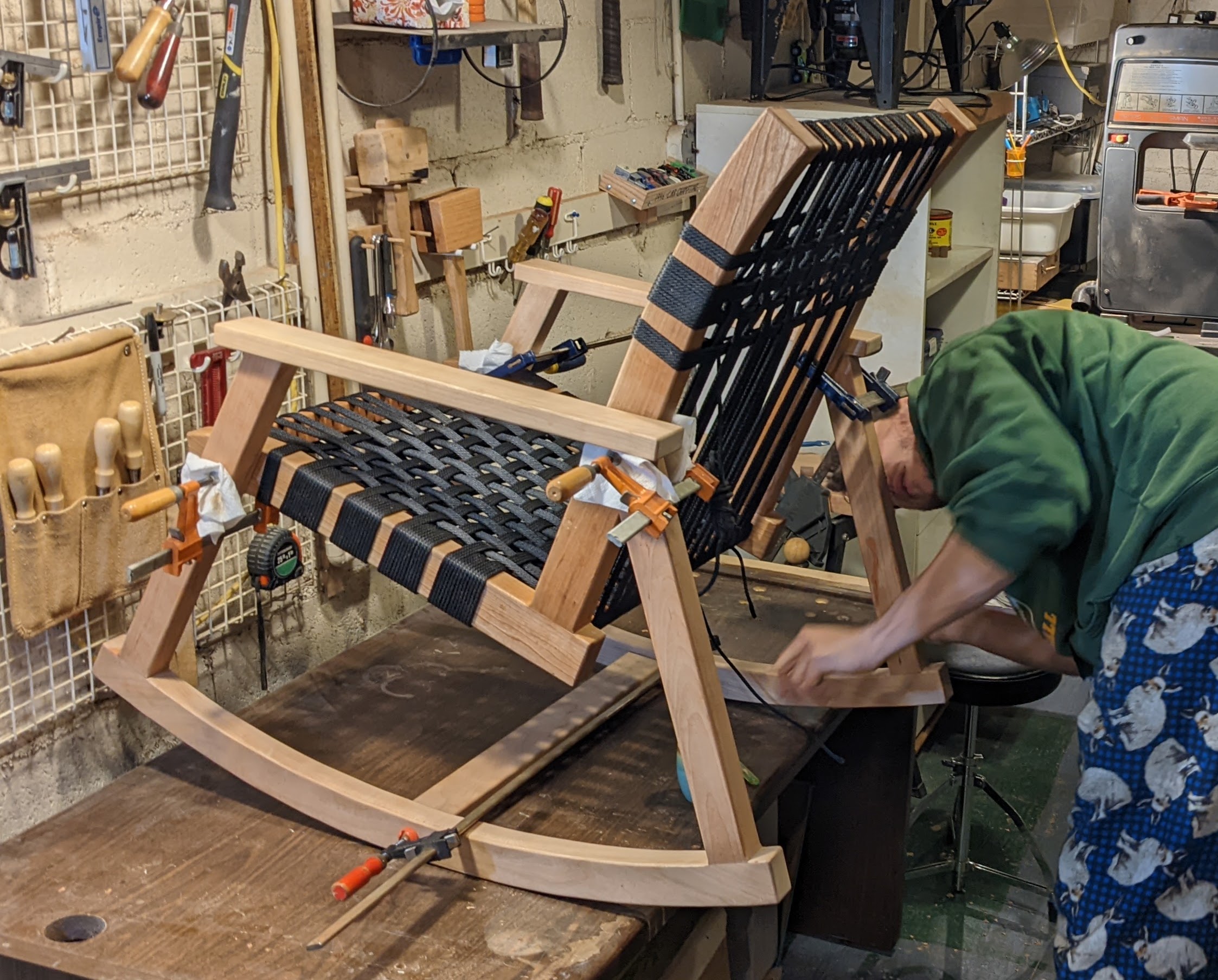 Very happy with how this project turned out. Happy birthday, Dad!